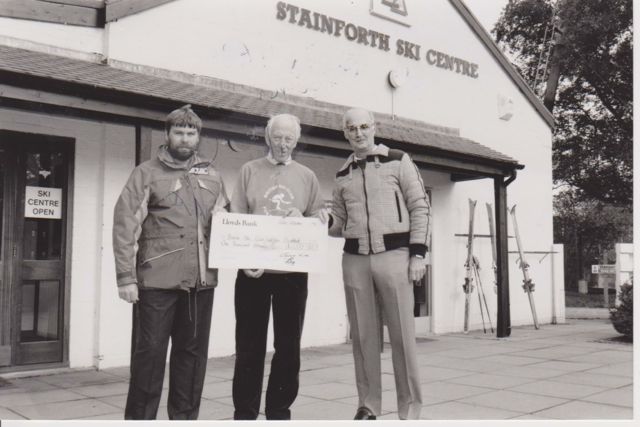 There has been a ski slope at Aldershot since the 1960’s.  Originally it was the Army ski slope and you can see what it was like in the early days at http://www.britishpathe.com/video/army-ski-slope/query/Aldershot.  In the early 1970’s the facility became a joint Army and Rushmoor Borough Council venture.  It is now Rushmoor’s Leisure facility, Alpine Snowsports, managed by Active Nation.

In 1974 Hubert and Joan Sturgess started the British Ski Club for the Disabled (BSCD).  They had seen Swiss blind skiers being guided and believed something similar could be provided on artificial slopes in the UK.  They developed a completely voluntary charity with no paid staff, it provided skiing for all disabilities and all ages and we were the first of the BSCD Clubs.
For over thirty years BSCD grew so that it operated from or had active representation in some 26 Centres in the 4 Nations and Dublin and BSCD was running up to 8 Snow Holidays a year in Europe and the USA.
In order to maintain  high standard of the assistance it could give to disabled skiers BSCD operated a training scheme with the Guides for the disabled graded at three levels and this was supported by two Guide Manuals and 2 Courses.

Over the course of time BSCD grew and by 2004 there were 46 BSCD Clubs and in the region of 2000 members within the United Kingdom.  In 2006 BSCD combined with the Uphill Ski Club and Disability Snowsport UK (DSUK) was formed.  This led us to become a DSUK Club in 2007.

However in 2013 we became an Independent Club affiliated to Snowsport England, breaking away from DSUK and we have now achieved Community Amateur Sports Club (CASC) status with HMRC as we feel this is the best way to further our aim.

We are introducing a new training scheme which uses the old BSCD principles assisted by the Southern Ski Club for the Disabled (SSCD) whose instructors still use the BSCD training scheme.  We feel that this is more suited to our dry (artificial) slope and it will ensure that we continue to deliver the best experience we are able to for our skiers and boarders both at our slope and on our trips.

We will continue our work for many years to come, enabling disabled people to enjoy snowsports.